Five Things You Didn't Know About Latinos and Hispanics 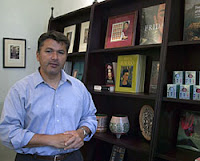 Louis Nevaer has written extensively about Hispanic and Latino culture and business. Despite the widespread Latino presence in the U.S., many remain unaware of some crucial facts about them. Here is Louis's list of the five things you didn't know about Hispanics and Latinos:

1. Hispanics are the Nation’s Youth. More than a third of all Hispanics and Latinos in the United States are under the age of 18.

2. Hispanics are the fastest-growing segment of the labor market. Since they are almost a decade younger than the general population, Hispanics and Latinos are disproportionately represented in the nation’s workforce.

3. Spanish is now a dominant presence in the United States. In 2009 the U.S. replaced Spain as the second-largest Spanish speaking nation in the world: only Mexico has more Spanish speakers.

4. Hispanics and Latin American immigrants account for almost all the population growth in the US. Because Hispanics and Latinos have higher fertility rates, they account for almost the entire native-born population growth. (Non-Hispanic whites’ fertility rates are below the natural replacement levels; African-Americans are just at the natural replacement level.) When immigration is taken into account, again, Latin Americans represent a disporportionate percentage of all immigrants to the US.

5. More than 34 million Mexican citizens can make a legal claim of one kind to emigrate to the US. The tangled flows of temporary immigration, military service in the US armed forces, and cross-border family relations means that about a third of all Mexicans have a legal claim to settle in the US. That so few choose to do so reflects the distinct cultural values that separate Hispanics from the Anglo-Protestant culture of mainstream American society.

Any other observations, reactions, or comments? Chime in below.
Posted by BK at 4:48 PM

Powerful facts. In California, at least, government has begun to reflect them. Not yet the Federal government. What year will we see the first Latino president?