Five Things You Didn't Know About the Aravind Eye Hospital 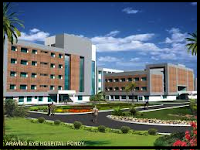 This eye hospital in South India manages to provide world-class eye care to millions despite the fact that the overwhelming number of their patients are poor and cannot pay. The story of Aravind can be read in the book Infinite Vision.

1. They never close and they never slow down. Aravind keeps its surgical equipment in operation 24 hours a day, which reduces the cost-per-surgery significantly. Also, doctors focus only on performing surgeries and leave nurses to handle pre-op and post-op care, which increases doctor productivity. These actions allow the hospital to operate on the poor at no cost while still being profitable. From April 2009 to March 2010, Aravind treated over 2.5 million out-patients and performed over 300,000 surgeries for poor patients.

2. They have McDonalds to thank for their modus operandi. Aravind's founder (Dr. V) was inspired by McDonald’s restaurants and wanted to model the eye hospital on them. Dr. V. was fascinated by the service efficiency, speed, and consistency of McDonald's operations and wanted to transfer that same process to the Aravind system as a way to cope with the increasing numbers of patients who began turning up at the hospital's door.

3. It’s still a family business. Today Aravind's top management team of nine executives are all Dr. V's family members, and all but two are doctors. Twenty-four other relatives work at lower levels in the hospital system's hierarchy.

4. They're not a charity and don’t ask their doctors to forego healthy salaries in order to serve the poor. Aravind's administrators can afford to pay market rates and competitive salaries. They recruit doctors from their own training institute, which offers an internationally-recognized two-year postgraduate specialization in ophthalmology. While doctors at privately run hospitals face pressures to deliver revenues, Aravind encourages "honest medicine,” with a balance between clinical practice and community work.

5. They make their own lenses and instruments – which are of such high quality that they are imported to over 120 countries. Up until 1992, Aravind was importing lenses at almost $150 per unit. By adapting technology initially sourced from the U.S., Aravind was able to produce its own lenses within an affordable price range of $2 to $10 each. Today they manufacture 2 million lenses a year and export them to over 120 countries (and have 7% of the global market share for intraocular lenses by volume). Their product portfolio has expanded to include suture needles, microsurgical blades, lasers, and eye drops.

So, what are the lessons we in the United States could learn here?
Posted by BK at 1:44 PM